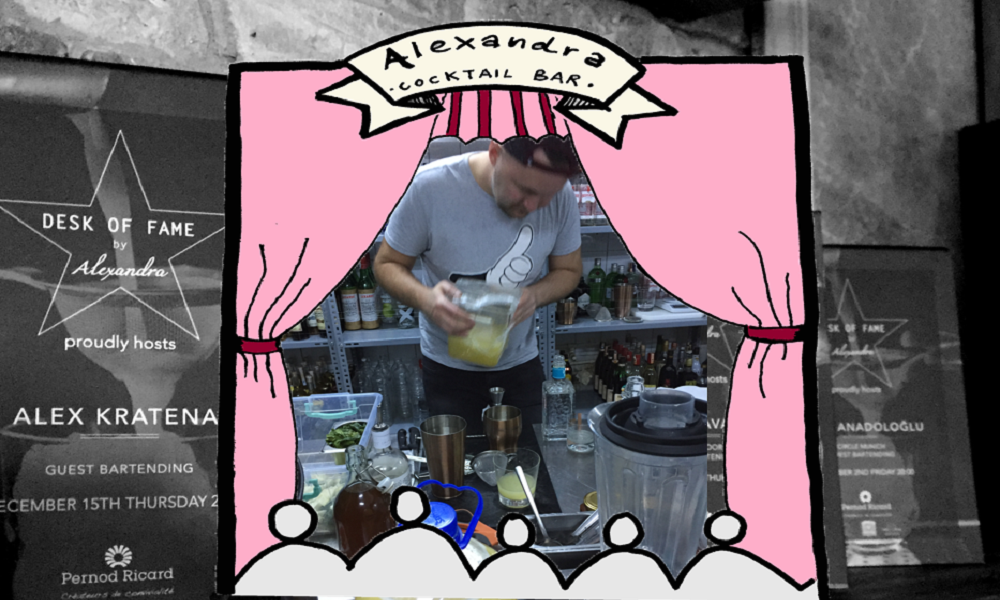 For this adventure, I was rather less a guest on a barstool, and more involved in the preparations for the Alex Kratena’s guestshift, and my first experience on the other side of the bar. I have already mentioned in my first story about “Bars in Istanbul”, that I was there at the same time as Alex Kratena. We were both staying in the same Hotel, so that gave me the opportunity to experience a whole day with a famous bar luminary.

The day with Alex Kratena

After the first night and a Turkish tea at the hotel, Osman picked us up for a breakfast together. It was a rich and very sumptuous one, just like Turkish hospitality: a “small” breakfast or snack often turns out to be a big meal. Full and satisfied we started a shopping tour for ingredients for the drinks. We crossed the Galata bridge to get to the spice bazaar. Many colours, the smell of spices and oil caressed the nose and bewitched the senses. We returned, fully packed, to the Alexandra Cocktail Bar.

My first visit to the bar was during the day, which is quite unusual. An opportunity to visit the kitchen, rather than just the bar laboratory, is almost never, so this was a very important day for me. The preparations lasted from noon to just before nine o’clock in the evening. First, the drinks were designed on paper, and then the ingredients were prepared. At the bazaar, Alex had bought some country-specific spices, oils and dried fruits. He already had a vague idea of his cocktail creations. To keep in the full-bodied flavours and aromas, the products were put in vacuum-sealed plastic bags, and placed in a sous-vide bath. The hours passed by quickly, while measuring, scaling, chopping, straining, filtering and cleaning. After the preparation process, it was time to build the drinks. Making, or better creating a drink, requires attention to its components.

If you face a well-balanced and tasty drink, you never know how long the bartenders laboured to get the flavour right.  I got an exclusive insight and must confess “seriousbarstalking is becoming more serious“.

The choice of the base spirit was the simplest part, the other components were more tricky. During the whole process I was asked for my opinion, what a great honour for me that was! Well, I have to admit, that I have already had some cocktails over the last years, and I have noticed that my sensory skills have actually improved. Here and there, it was necessary to re-adjust, but you could see the professionalism and many years of experience. In addition, Alex is a supercool guy. He is one of the best international bartenders and influences cocktail culture around the world. He is modest, cheerful and respectful. The five drinks for the cocktail menu were perfectly tailored. My favourite was the Pasa Cayi, strong and round in flavour, served in a traditional tea glass. The Good Kisser reminded of mulled wine with its Christmas flavour. Each drink in itself was a piece of art.

Thanks to the great photographer Salih Erçetin for providing the pictures. More of his photos can be admired on his Instagram account. 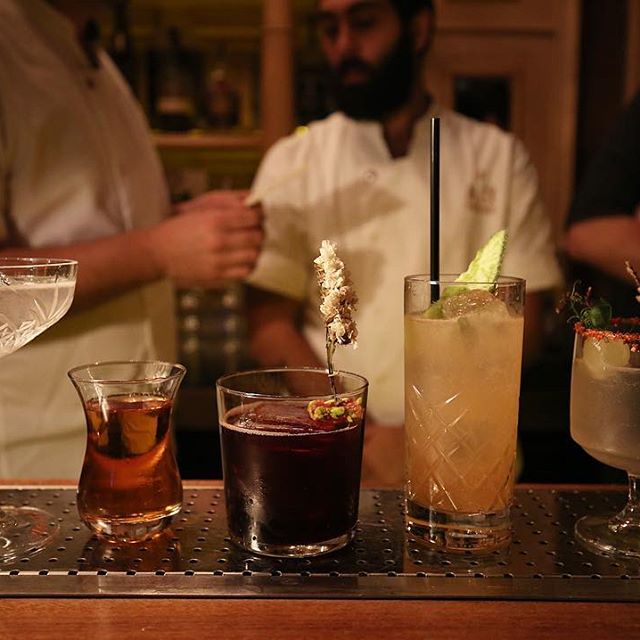 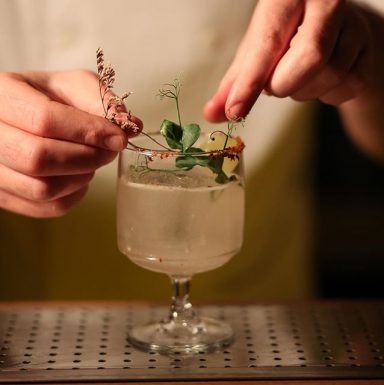 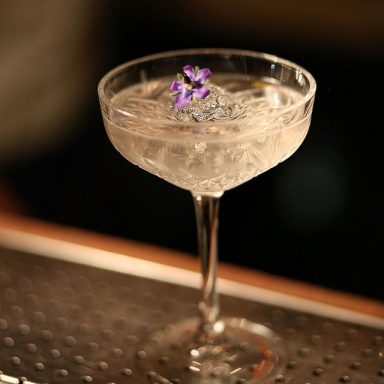 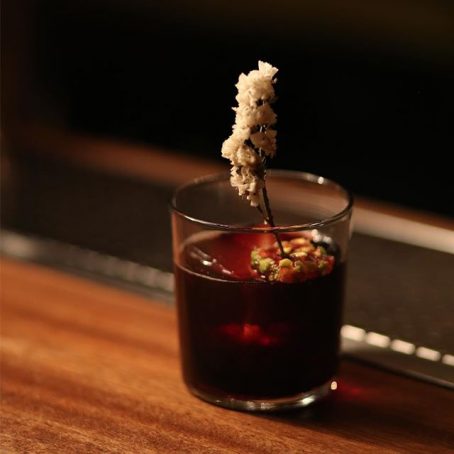 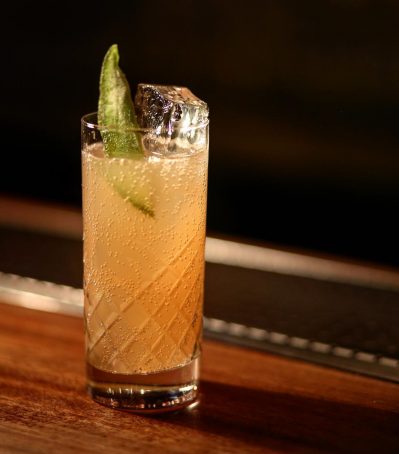 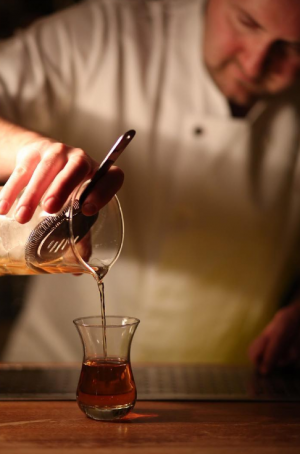 This day was an extraordinary experience and has confirmed my respect, appreciation and passion for the bar world. Enough written, here are a few of my impressions. 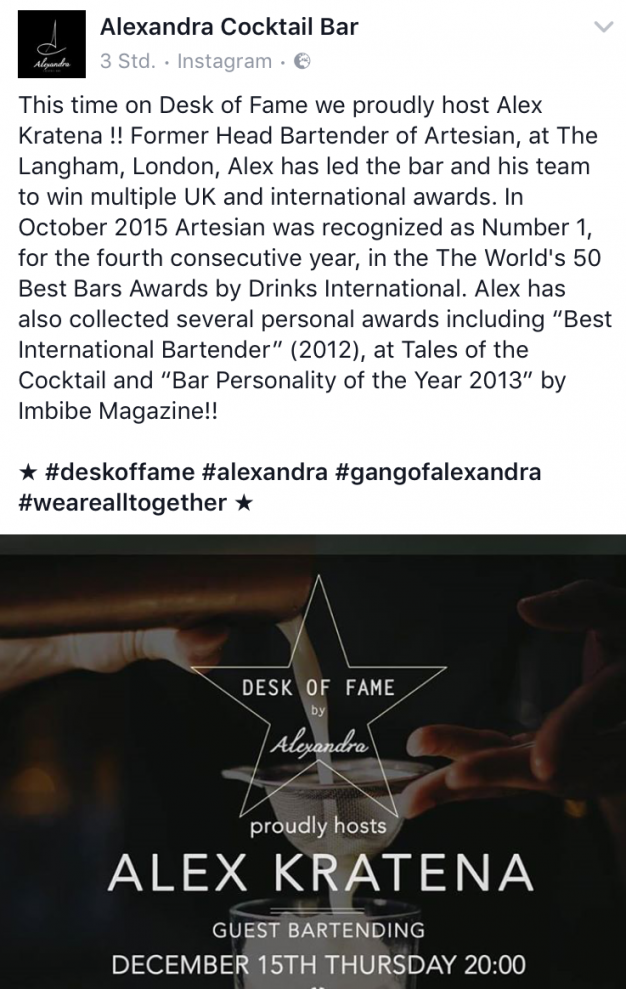 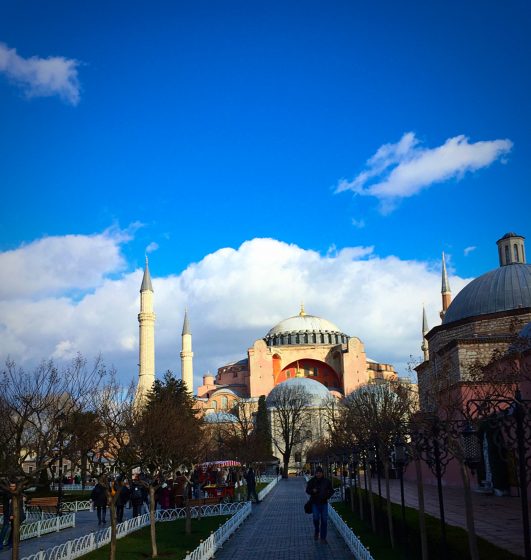 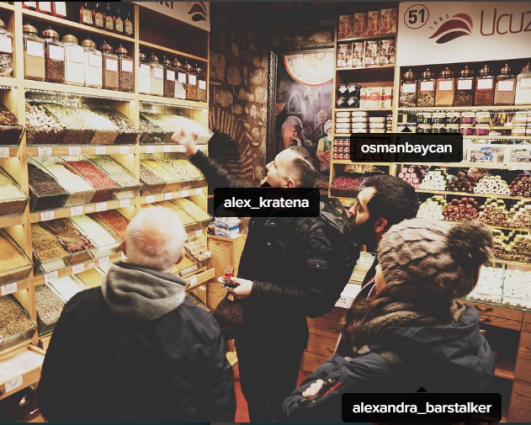 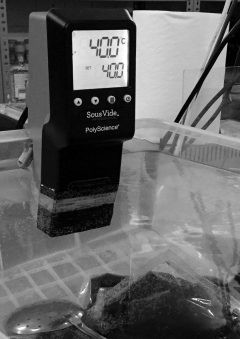 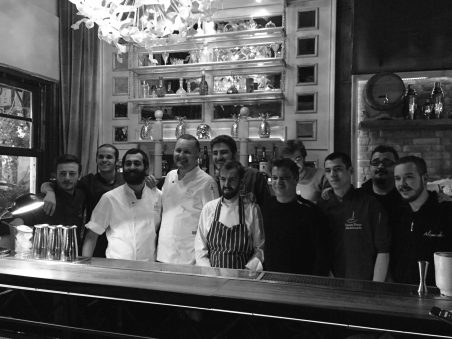 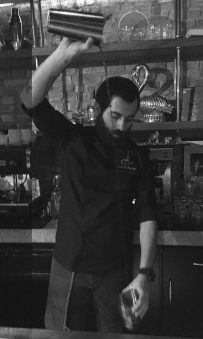 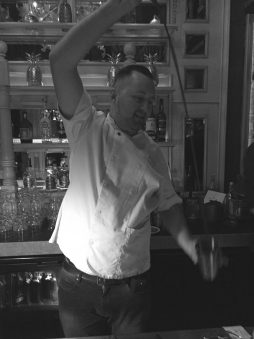 My first official day behind the bar

For many years, I have been watching and admiring the craftsmanship of bartenders: the various techniques, the graceful filling of vessels, the turning of ice with a bar spoon, the chinking of ice cubes is music to my ears. As soon as I sit on a bar chair, my mind starts to relax. When Osman asked me if I wanted to make a kind of guestshift on Friday, I had to laugh. Me? Although I worked in the service for many years and I can make a proper gin & tonic, I leave the rest for the experts. However, my curiosity was awakened, and fearlessly, I accepted his offer. The Friday evening started quietly. To strengthen and refresh, a delicious dinner from Robin’s kitchen was served. Then, it was time to get dressed for work. I put on a grey shirt with a large embroidered “A”.

Right behind Osman, I passed through the tiny little door that led behind the bar. He told me quickly and easily the most important social etiquette. The space behind the bar is limited, and clear signs are needed to be sure not to hinder anyone. A slap on the shoulder, for example means, that you have to make some space and let the others pass quickly by. My place was at the last mixing station,not to get in the way of anybody. Already familiar with the cocktail menu, now, I got to know the right glasses for each drink. Osman is a real master and his teaching skills are amazing. He calmly explained procedures and my tasks. To help me remember, he labeled the glasses with the appropriate cocktail names. His title “Master Splinter” is well-deserved. I felt more like a clumsy baby turtle than a ninja turtle. Equipped with the ice shovel, I prepared the glasses, as required. Sounds easy, but with almost 1,000 cocktails at a weekend with two mixing stations, it is sporty.

A well-known Istanbul bartender wanted to have his whole drink prepared by me. He ordered a Passiflora and I tried my luck. As I happily pushed the glass towards him, he said, “That’s your first drink, right?” I did not know,that these jiggers lead a life of their own! The jet from a bottle does not automatically hit the vessel. I initially spoiled the largest part in a beautiful circle around it. The shakers are also damn heavy, and basically it shook me more than I did the content. But I had a lot of fun. The guests were polite and nice. The bartenders were more reserved,  especially when dealing with women: it is important to prevent misunderstandings in order not to have to deal with their jealous men. Drinks were paid for in advance, as otherwise customers could forget to pay

The thing, I liked the most was team spirit behind the bar. After the shift, I talked to Osman about his life so far. Maybe I should also dare to a make some bartender portraits. 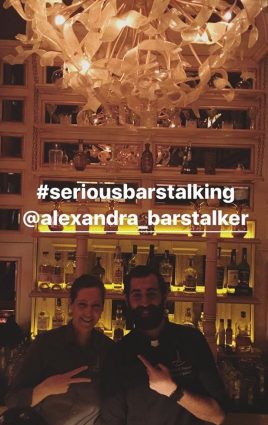 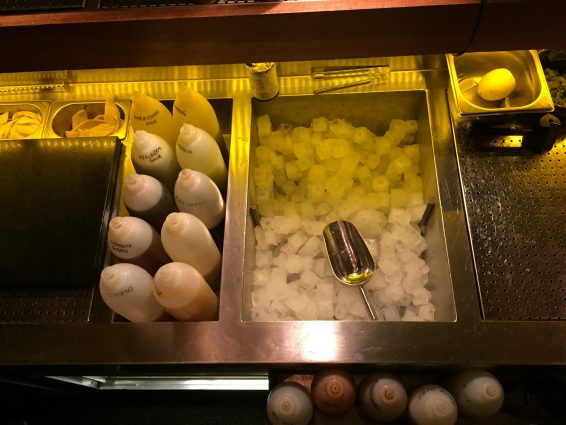 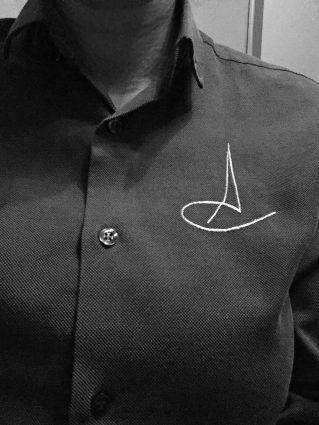 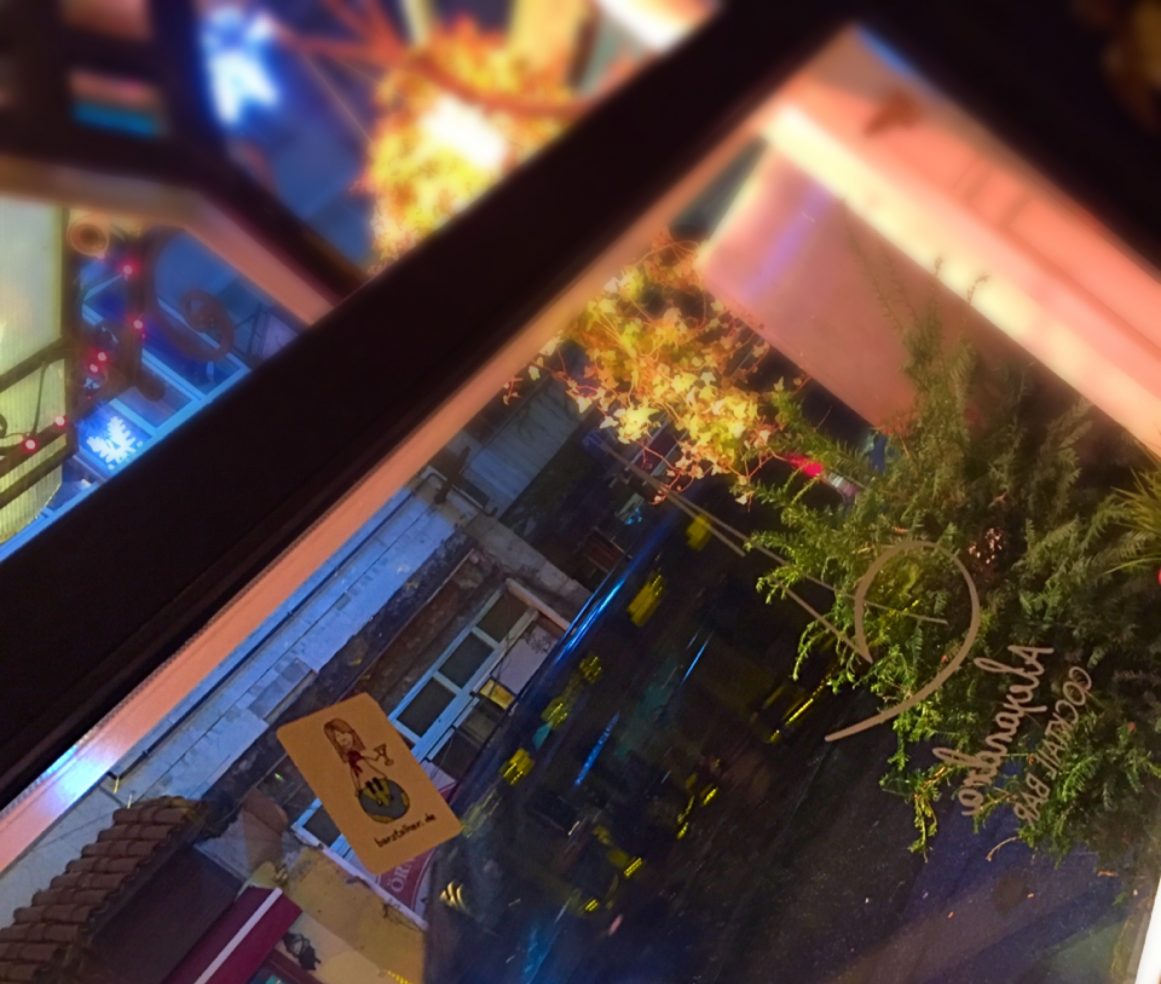 Paradiso – Paradise behind a fridge → 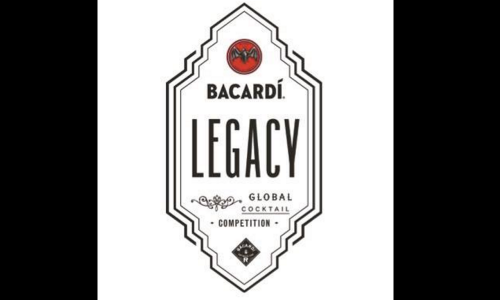 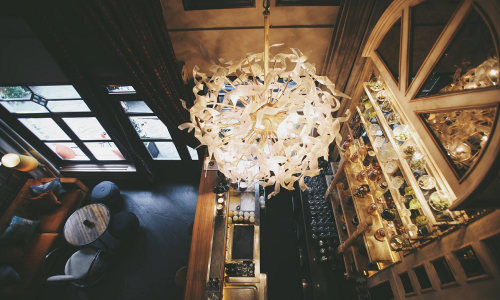 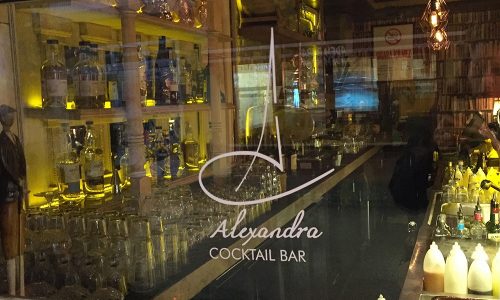