The Drifter – A Tropical Hideaway in Ghent 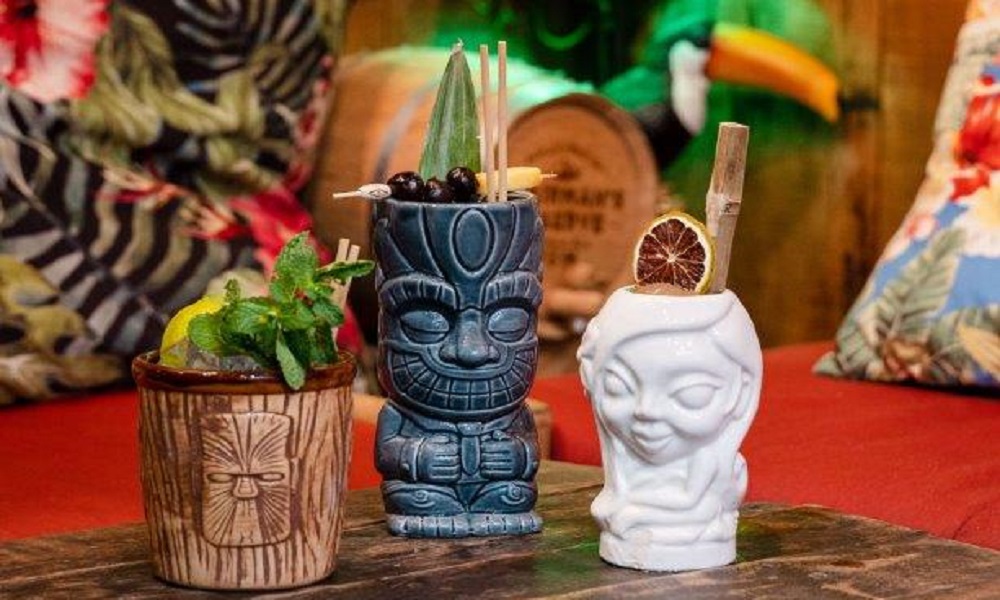 Although Ghent is relatively small, it offers a wide range of different bar concepts. A stone’s throw away from Jigger’s you will find Belgium’s first and only Tiki Bar. Let’s take a look inside the exotic world of The Drifter.

Directly in front of the entrance, you’re greeted by a tropical outdoor terrace for lounging around with your drinks in the warmer weather. Once inside, you feel like you’re in a small refuge with an eye-catching interior. The bar itself seats fewer than 30 people I would estimate and is dominated by a beautiful, wave-shaped mosaic tile bar counter which meanders along the wall.

A tiki bar generally has a Polynesian, Caribbean look & feel and its bartenders dress in Hawaiian style shirts. It takes you on a short trip to the South Pacific and delights you with exotic cocktails. For me, when you enter a tiki bar, it feels like you’ve been transported to the film set of Blue Hawaii and I somehow expect Elvis Presley to come around the corner singing and playing his ukulele. Others, maybe think more of Hula girls shaking their hips.

The Drifter is tropical escapism to the relaxed and sunny side of life and home of exotic tiki cocktails. The little bar transports you straight to warmer climes.

The main feature of a tiki bar is indeed kitschy, colourful and over-the-top décor. A lot of everything and way too much of a lot of other things. Tiki bars are aesthetically defined by their tiki culture décor which is based upon a romanticised conception of Polynesian pop history. At The Drifter you will find the concept perfectly implemented. The bar is decorated with tons of tiki memorabilia and mugs from other tiki bars around the world. You also have bamboo furniture, carved tiki sculptures, palm tree motifs, fishing nets, glass floats, wooden masks, colourful fabrics and so on. A huge collection of rum and a cabinet full of vintage bottles complete the picture. 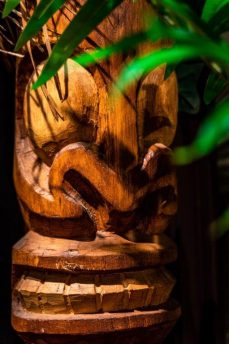 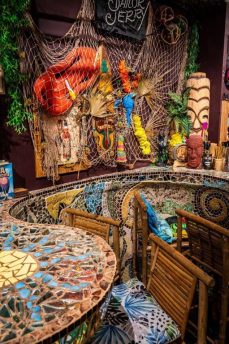 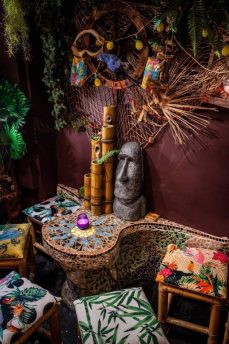 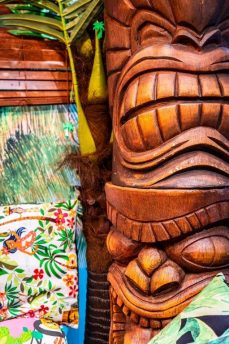 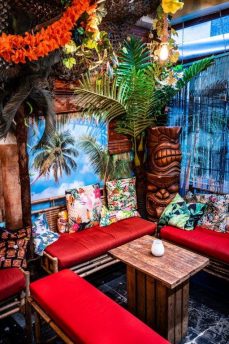 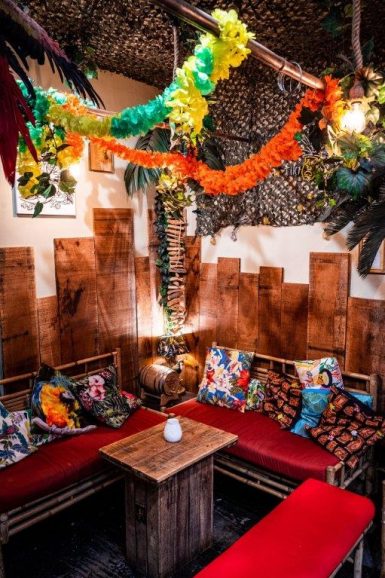 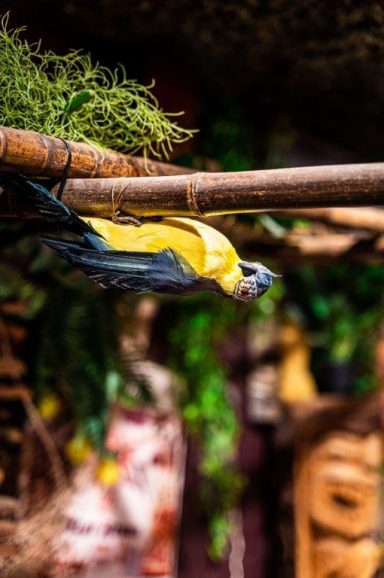 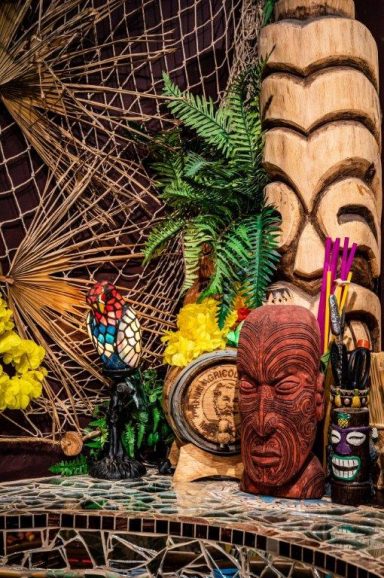 The country’s first tiki bar opened its doors in 2014 and is helmed by Tom Neijens. He’s a well-known rum expert and co-author of “Rum: The Complete Guide”, the ultimate guide to rum presenting 400 pages of the most outstanding rum varieties, plus cocktail recipes and lots of entertaining background information.

Furthermore, Neijens markets his own Tiki Spiced rum: World’s End Rum. It’s the liquid brainchild of two Belgian pirates: Lester Schutters and Tom Neijens. I’d already tried the rum at the Wroclaw rum festival in 2017 and I was already enthusiastic about its successful mixture and strong character. Since then, it has conquered the world and won countless medals at every rum festival.

Tasty tiki drinks and a rumtastic selection of vintage bottles await you at the Drifter.

The main spirit of a tiki bar is rum, and you will find lots here, 200+ are in stock. Every month the bar puts rum from a specific country in the spotlight. Learning by drinking, simple as that. The menu lists Caribbean cocktails from strong to super strong. The Zombie for example is available for a maximum of two per person and visit. Drinks are served in typical tiki vessels and are lavishly decorated. 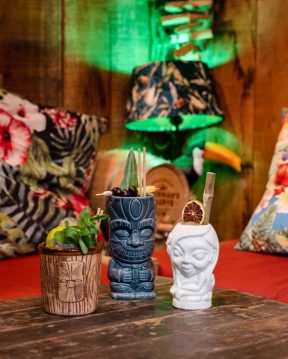 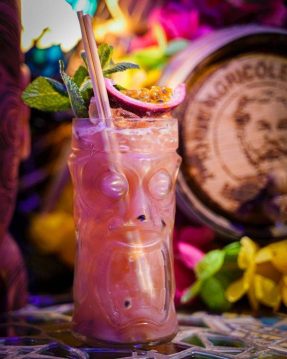 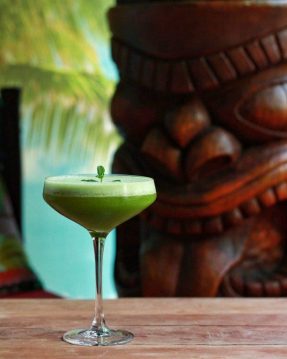 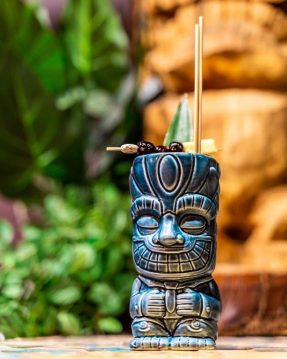 The Mai Tai, which is considered to be the most iconic tiki cocktail, is made with a house blend of three rums, orange curaçao, lime and homemade orgeat. A must at The Drifter!

Who created the Mai Tai is a passionately debated question, regarding both the right way to prepare and its origin. Most people consider the Mai Tai to have been invented by Victor Jules Bergeron, who became famous as “Trader Vic”. It’s said that Bergeron invented the drink in 1944 in his restaurant “Trader Vic’s” in Oakland, California. According to his own account, he first introduced the new drink to a friend visiting from Tahiti who immediately exclaimed, “It’s Mai Tai Roa Ae!” (Tahitian for “Out of this world – The Best”), and the name was born.

However, Ernest Raymond Beaumont Gantt aka Donn Beach aka “Don the Beachcomber”, the godfather of the tiki era, also claims the invention of this classic. He offered the drink – also according to his own account – before Trader Vic did, in his tiki bar as Mai Tai Swizzle. After a legal dispute with Trader Vic, he was no longer quite so sure and left Trader Vic to take credit as the creator of the drink. In addition, the Royal Hawaiian Hotel in Honolulu also claims to have invented the Mai Tai in the 1920s. Fact is, it’s hard to get a decent Mai Tai. At The Drifter you are in the best hands to get a very good one.

A trip to a tiki bar is a multi-sensory experience for your eyes, taste buds and ears. At The Drifter you almost experience sensory overload. Enjoy a little bit of escapism from your everyday life.

Ghent has many different concepts to offer, so even if a touch of Hawaii isn’t for you, you can definitely find a concept that suits you better.

Visit The Drifter | Pictures were provided by Tom Neijens

← The Cobbler – Hotel Bar with a Stunning View of Ghent

Super Lyan Amsterdam – Not a Hotel Bar, but a Bar within a Hotel → 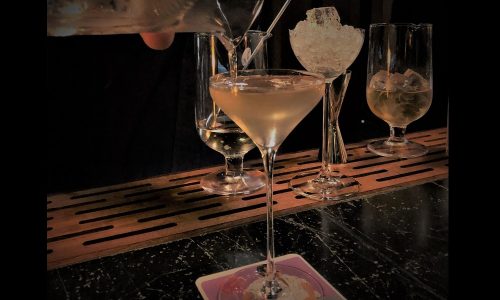 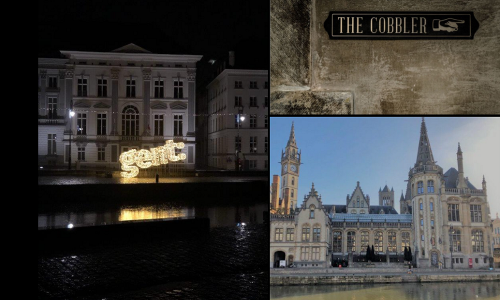