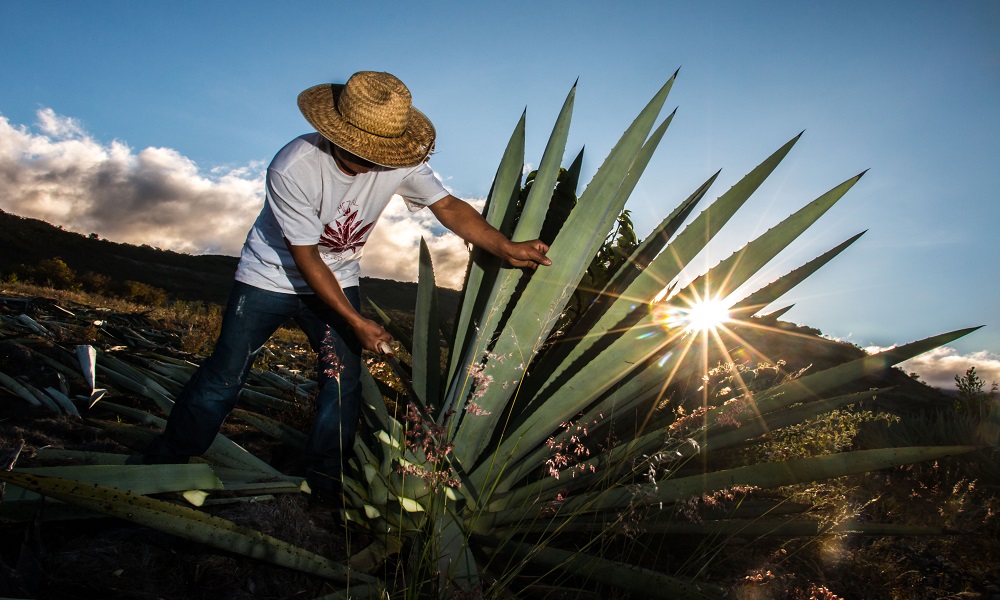 I love spirits with character and the one that is closest to my heart is Mezcal. More and more bars offer a wide range of agave distillates and serve delightful cocktails. There has never been a better time to be a mezcal drinker than now. Some dislike its unique taste. For me, mezcal has a wide range of flavours, some are really smooth, some stronger, there is earthiness, smoke, and you can taste the sweat of the painstaking work. It is a very romantic spirit with a strong character, handcrafted and made on small family farms in Mexico.

The word mezcal comes from the pre-Columbian language Nahuatl and means “oven-cooked agave”.

Agave distillates have become more and more popular. I had my first mezcal in a bar a couple of years ago, it was a mild Marca Negra Espadín. The bartender said that if I liked peaty whiskies I would also enjoy this. He was so right and from that time I started to drink my Blood & Sands with mezcal. So much for my history.

Mexico is home to the highest biodiversity of agave varieties in the world. Mezcal is a distillate of agave, simple as that. Agave plants take years to mature, depending on the type it can take 7 years and longer. So this is not a quick-turnaround mass-production spirit as is assumed by many consumers. It is artisanal, produced in small batches and has a long history. This makes agave spirits fascinating and worth protecting. It is the spirit of a nation and the ecosystem is limited. Each Mexican state has its own style of mezcal based on the diverse array of indigenous agave and the traditional production process.

It is the Spirit of a Nation. Think before you drink.

I highly recommend watching the movie Agave: The spirit of a Nation. This expressive documentary takes viewers beyond the spirit to discover how one plant can carry the weight of a culture and the people trying to protect it.

In Mexico, mezcal production was banned by the Spanish crown for almost 100 years in the early 18th century. However, local producers resisted and continued to produce mezcal in the beautiful mountains of Oaxaca. Among them were some brave women who sold their mezcal illegally from town to town, risking their own lives in the process. The brand La Escondida, meaning “hidden lady”, was created in honour of the women who have kept the tradition alive.

It is exactly one year ago since I met Dario Sanabria Anaya and his mezcal La Escondida for the first time. I visited the Moscow Bar Show that had Agave spirits as a big topic. From then on we have met in several places again like in Berlin, Athens and Edinburgh. I also have my very own personalised copita (a traditional mezcal vessel). This is a great marketing gift and Dario engraves names on each copita by hand. This is also handmade 🙂 and the best way to make friends and keep the mezcal in mind. 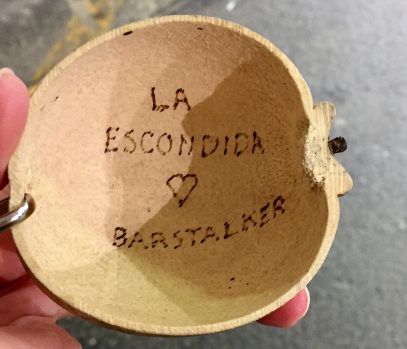 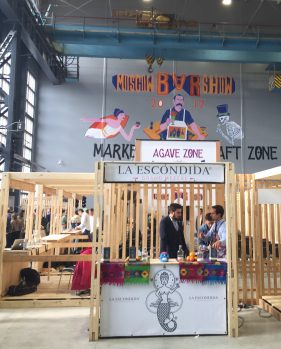 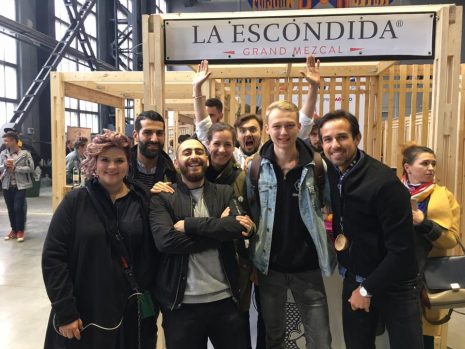 I want La Escondida to become a timeless and iconic brand, but my most important goal is to carve out a significant niche for agave spirits in the world of cocktails and gastronomy by inspiring new styles of drinking and eating.

Dario founded Grand Mezcal in Mexico in 2014. His goal has been to take his unique beverage to many corners of the world and share his passion and knowledge about it. The name La Escondida is inspired by a local legend. La Escondida is the name of the first spirit launched in early 2015 by Grand Mezcal and means “hidden lady” in Spanish. She was a princess who fought against Spanish colonisation in the 15th century. According to legend, she disappeared in the ocean and turned into a mermaid who protected local residents. From that time on, people have called this part of southern Mexico Puerto de la Escondida (“Port of the Hidden Princess”). For Dario, it is the women of southern Mexico who have kept the mezcal tradition alive until now. This is the reason he named the product La Escondida, the princess who fought against the Spanish. It is to honour these women who came to be known as “mezcalilleras.” So, a mermaid decorates every bottle and is the logo of the spirit.

In Mexico they say: Un mezcal es como una mujer, le das besitos.  That means in English: Mezcal is like a woman, you kiss her.

But before we start kissing, let’s have a look at the production process in a nutshell. 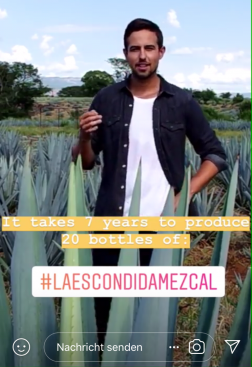 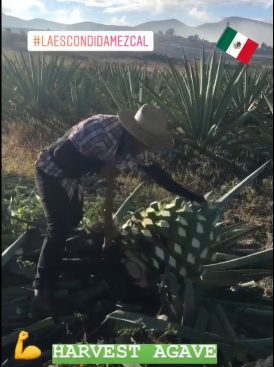 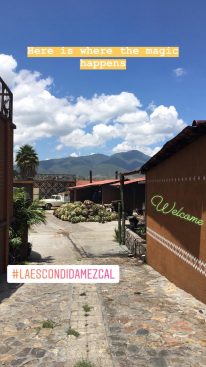 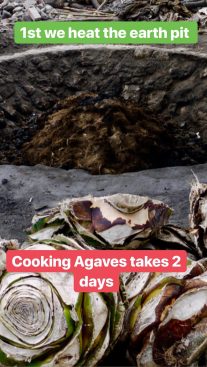 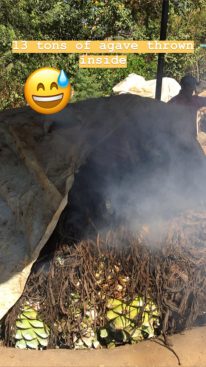 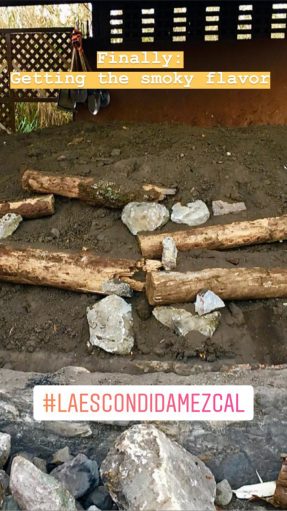 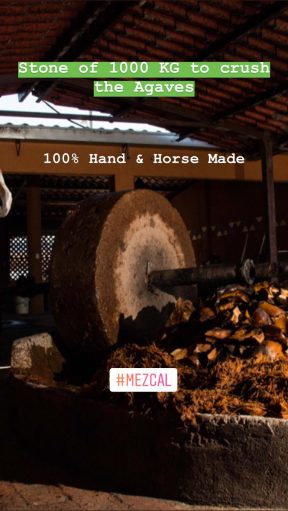 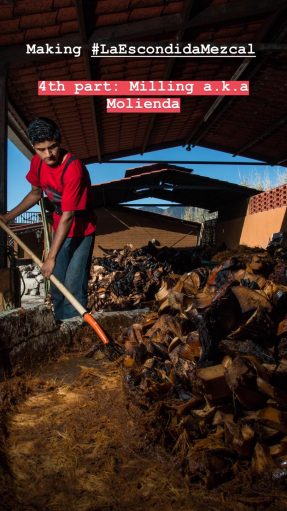 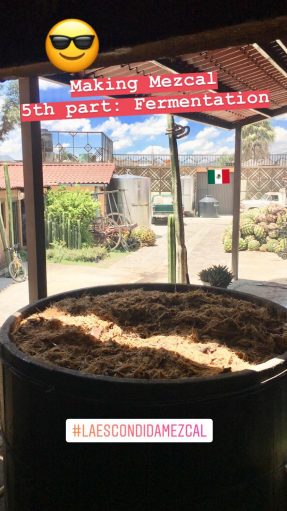 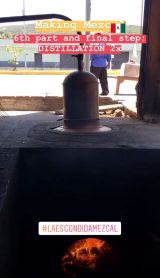 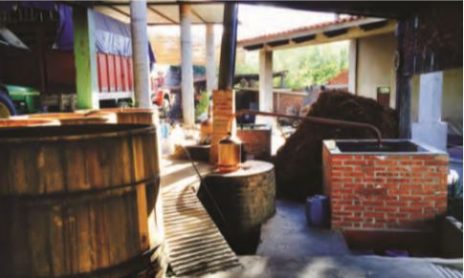 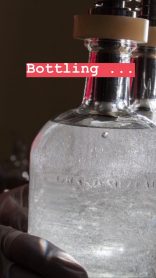 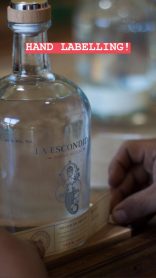 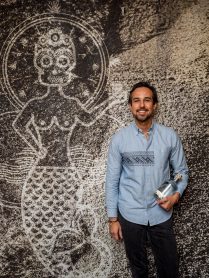 La Escondida is produced exclusively with agave from Oaxaca in the southern part of Mexico, which provides it with the rich variety of the starches and sugar that make mezcal so sweet and delicious. This Mezcal is carefully distilled at La Escondida distillery, located in Santiago Matatlan, Mexico.

La Escondida is a blanco mezcal, meaning that it is bottled immediately after distillation instead of undergoing barrel ageing. Blancos reflect he character of the agaves used very clearly. It is a Mezcal Artesanal which means that it is characterised as handcrafted, made the old school way. The processes and tools don’t have to be exclusively traditional compared to the category Mezcal Ancestral but nevertheless the whole process is focussed on craftsmanship.

This mezcal was designed specifically to be both drinkable and mixable. Its complex aromas featuring an elegant smokiness. On the nose it is fruity and surprisingly smooth in the mouth, perfect for sipping neat. It has aromas of herbs and cinnamon. It is crisp complex, very elegant and smooth. Everybody’s palate is of course different, but this has the potential to  become everybody’s darling.

Dario loves to drink a glass of La Escondida Mezcal with a blond beer.

I love it neat too from my own copita or as a Smoky Negroni.

Mix the ingredients, stir and serve in a tumbler on ice with an orange zeste.

Pictures were provided by Dario Sanabria.

La Escondida is distributed by Ferrand in Germany since the beginning of September. Ask your Brand Ambassor for further details. 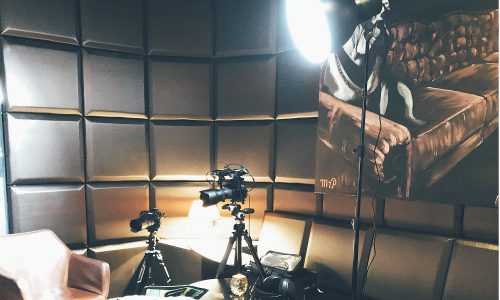 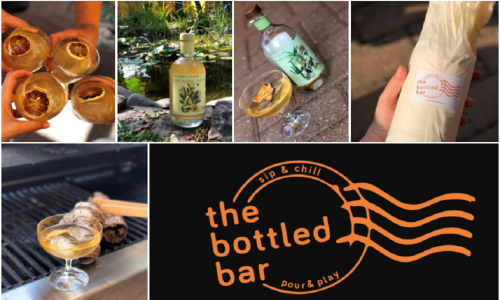 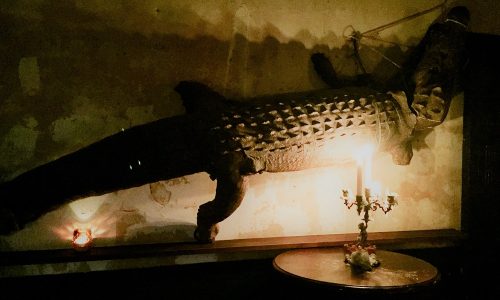